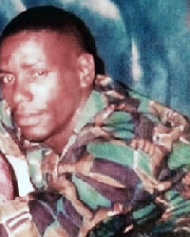 Willie James Clark, Sr. was born December 30, 1964, in Houston, Texas to Ida Mae Clark, he was her eldest child. Willie graduated from Jack Yates High School. He passed away December 30, 2013 in Lubbock, Texas.

Willie worked for most of his life as a cook, and he loved spending time with his children. Willie had unconditional love for his family.

Preceding him in death are his mother, Ida Mae Clark, and his sisters, Connie Kennedy and Ida Marie Clark.