add a candle »
Aug 8, 2013 Fond memories in our gridiron days at the University of Houston Dick Kirtley
Aug 7, 2013 You will be missed, Bill. I have many fond memories of you and Diane for the last 20 years. I treasure them more now than ever before. Duane and Deanna Euerle
add a note » 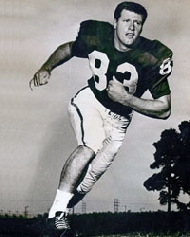 William “Bill” Paul Brown was born January 12, 1940 in Galveston, Texas to Paul Armstrong and Ruth (Thornton) Brown.  Bill grew up in Galveston and graduated from Ball High School.  He was a talented athlete and was a Golden Glove champion.  Bill graduated from the University of Houston where he was a four year football letterman and led his team to a conference title in 1959.  He was a member of           H Association and Pi Kappa Alpha Fraternity.  After college, Bill was drafted by the Chicago Bears to play football.

Bill began his career in heating and air conditioning sales and service in 1965 in the Houston market area.  He also worked in insurance sales, car sales, and with FEMA.

Bill was an avid fisherman who also loved hunting and boating.  Many memories were made with his family at the beach.  He found pleasure in teaching them to fish.  Bill was a great cook and also enjoyed Zydeco dancing, going to the casino and many sports.

Bill took pride in his son Paul and loved having his grandchildren around.  They held a special place in his heart.