add a candle »
Jun 17, 2012 The Carnes Funeral Home Staff offers our sincerest condolences to the entire Haden family. It was our honor to serve your family.
Carnes Funeral Home Staff
Nov 5, 2011 Our Prayers are with you. We are out of town, due home monday if Tommy or I can help you in any way please call. Sharon Wiggins
add a note » 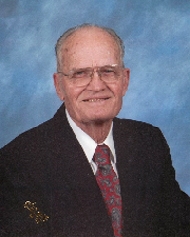 Will Haden passed peacefully from this life early Thursday morning, November 3, 2011, at home, surrounded by his loving family.

Will was born in Timpson, Texas, on October 7, 1927. He served in the US Army; and in 1947, he and his new bride Peggy moved to Texas City. There Mr. Haden began his career with Union Carbide and retired in 1983 after 35 years of service.

Mr. Haden was a loyal member of First Baptist Church, Texas City since 1952, and taught Sunday school for the Men’s Class. He enjoyed spending time with his family, and looked forward to fishing on Lake Rayburn every spring and fall. His pride and joy were his grandchildren, and he never missed an activity in which they were involved.

Will was preceded in death by his parents, George and Ettye Haden, his twin brother, Ferd Haden, his sisters, Minnette Miller and Anita Haden, and his beloved granddaughter, Valerie Grace Wheeler.

The family wishes to extend sincere appreciation to Ranay Danek and Marvena Wolf of AMED Hospice for their compassionate care given to Mr. Haden during his illness, and to the many friends who also offered their prayers and support.