add a candle »
Jun 13, 2018 Mr. Ken you will forever hold a special place in everyone\'s heart that you have crossed paths with. I am truly great full for the 4 and a half years that I knew you here at ANICO, you always started the day off with a bright smile and cup of coffee. Rest easy my friend, until we cross paths again. Officer Gentry
Jun 12, 2018 Kenny was one of my Besties that I could count on one hand: now I have a finger missing. He was kind, generous to a fault, loved deeply, and was deeply loved. Who I will solve the world\'s problems with now? I know that wherever he is, it\'s a better place because he\'s there. I cherish him always. Karen Parker
add a note » 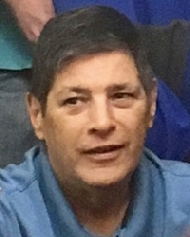 Walter Kenneth Nelson, Jr. passed away suddenly on June 3rd, 2018 in Galveston, Texas.  “Ken or Kenny”, as he was fondly known was born in Corpus Christi, Texas, on December 10, 1952 to Walter Kenneth Nelson, Sr. and Winfred Mathis Nelson.  He was raised in Houston, Texas and spent some of his early years in Austin, Texas, where he worked as a Title Examiner.  He then moved back to Houston to help take care of his mother.  After her passing, Kenney moved to Galveston.  The Birthplace of his Father and a favorite family destination over the years.

His true love was in the food industry where he spent his final working years.  He was employed by Kathy’s Katerers until their retirement and then worked at American National Ins. Company on the kitchen staff.

Ken is survived by his cousins, Kathy Mathis Austin (Gene) of Texas City, TX;  Deborah Hales of Rockport, TX; Wendy Gayle Denson of Needville, TX; Cheryl Vinson of Texas City and his God Child, Elizabeth Blackburn(Bren) of Texas City.  Ken is also survived by the Love of his life, Adrianna Solis of Houston, TX and Life long friends, Bill Kennedy and Xuan Vandeberg of Houston and Karen Parker of Arkansas.

Ken was a man of many talents and an avid reader.  He was a generous and kind hearted man.  Over the years, although not a man of means, he supported many charities as well as physically and monetarily supported many individuals in need.  He believed in giving 110% at your job and giving more back than you were given.  He will be sadly missed by all who knew and loved him.

Family and friends will be received at a visitation on Tuesday, June 12, 2018 at St. Mary of the Miraculous Medal Catholic Church in Texas City, TX from 9am until 10:00am.  A mass will immediately follow the visitation beginning at 10:00am.  Graveside rites and interment will follow at Calvary Catholic Cemetery in Galveston, Texas.  Please visit Ken’s obit on the Carnes Funeral Home website at http://obit.carnesfuneralhome.com/walter-kenneth-nelson-jr to lite a candle of remembrance and leave memorial tribute.