add a candle »
Jan 30, 2019 I am terribly sorry for your loss. May you take comfort in knowing that every single tear that falls from our eyes, does not escape our loving Heavenly Father\'s notice. He is aware of our pain and promises to end all suffering. (Revelation 21:3,4)
May these words be a source of comfort to al Jenna M.
add a note » 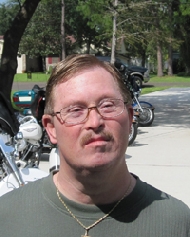 Tommy spent his childhood in Houston, TX, and was a 1978 graduate of Reagan High School in the Houston area. Tommy has resided in Santa Fe, TX with Danny and Kim Forbes for the past 15 years. Tommy was a member of Broadway Baptist Church and loved to go to church every Sunday growing up. He spent his younger years playing the drums, listening to music, and dancing around the house. Tommy enjoyed bowling, coloring, playing slot machines, and watching wrestling. He loved when they had BBQ’s and get togethers at the house. He even became an honorary member of the Boozefighters to be like his big brother Danny. Tommy always walked around with a smile on his face, and just wanted other to smile with him. He was simple guy with a huge heart and loved his family and friends so much.

Tommy touched so many hearts during his 58 years, and he will be loved and missed by all who knew him.