add a candle »
Jan 17, 2020 What a kind soul Stan was. Knew him as a fellow architect and a friend. Never knew he was color blind. Know God has given him back his love for colors. He painted all of our lives with the colors of Spring. RIP Stan. Jim Kollaer
Jan 15, 2020 Stan was one of the most kind and helpful people I ever knew at WASH. I know you will be missed by so many. Vicky Williamson
add a note » 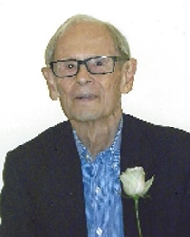 Stanley S. Smith (Stan) died December 27, 2019, at his home in Houston with his love Suzanne Leatherwood close by.  Stan was born June 20, 1928 in Abilene, Texas.  He graduated from Enid High School in 1946.  He attended the University of Oklahoma in 1951 with a Bachelor of Architecture degree.  Stan is preceded in death by his parents Stanley and Margaret Smith, and his sister Jean Talbot.  Stan served as an officer in the military during the war in Korea.

In 1953 his career as an architect began in Dallas, Texas.  He was a principal in the firm of Lane, Gamble, Huddleson, Smith.  Their clients included the City of Dallas, City of Garland, Frito-Lay Inc., Braniff Airways, Exchange Bank and several commercial investors and building developers.  In 1976 he joined 3D International in Houston, Texas.  He managed commissions in the Middle East, the Far East, in Texas and in New Jersey.  In 1984, he joined The Prudential Realty Group providing asset management of investment properties.

Since his retirement in 1993, Stan has invested much of his time painting watercolors.  Boats and water of the Boliver Peninsula have inspired many of his paintings.  He was an active member of the Watercolor Art Society-Houston.

Stan has willed his body to the Baylor College of Medicine for medical research.  There will be no formal service.  Memorial donations in lieu of flowers may be made to Watercolor Art Society-Houston, located at 1601 West Alabama Houston, Texas 77006.