add a candle »
Aug 22, 2017 A week ago today - heaven gained an angel. The pain is still so very fresh - I miss you Aunt Charlene. Til I see you again. SARAH ELLEN
Aug 21, 2017 Judy, Louise and Richard: I am so sorry for your loss. Please know that you and your family are in my prayers. Tom Prouty
add a note » 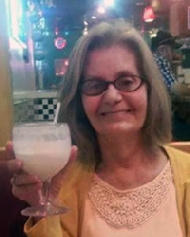 Charlene was a lifelong resident of Texas City, Texas graduating from Texas City High School in 1968. She would proudly tell everyone she was the president of Future Homemakers of America and a May Fete Princess.  After high school, she attended Lamar University for two years with a pre-med major.

Charlene was employed by Southwestern Bell for 15 years.  Most of these years, she was a single mom.  She worked hard at this difficult job to provide her three children a good home and a good life. Her only son, Josh was in special Olympics and she saw to it that he and his friends made it to their events. She was supportive of all things Special Olympics and was once named Special Olympics Mom of the year.

Charlene loved a good margarita, Mexican food, the beach, animals, her family and the ID network. In her youth, she was an avid reader.

In 2005 Charlene beat breast cancer, but this year cancer came back with a vengeance, and had spread throughout her body.  After a brief courageous battle, her late mother called her home on this special day.

For the last 30 years her son, Josh has been her constant companion, giving each other support through many challenges; however, Josh will quickly tell you he would rather be living with Steve Martin and his 12 children.

She is preceded in death by her namesakes, parents, Sarah and Charles R. Holcomb, Sr.

The family would like to thank Larry Baskin, her caregiver, and all the family and friends that surrounded her with food, laughter, and love.