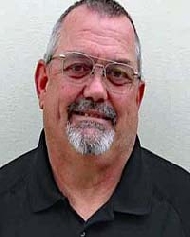 Russ was well known throughout the communities of Galveston, Brazoria, and Houston. He was a graduate of Clear Lake High School Class of 1974 and a college graduate of Sam Houston State University class of 1976.

Russ gave twenty-one years of service to the League City community as a telecommunicator from 1993 to 2015 and then West Columbia 2015 to January 2021. Russ had always been a man that served his community with involvement through the Christian Motorcycle Association and had spent countless hours working over the years with the Lone Star Rally and the Texas Mile. He started serving his communities he lived in when he was a teenager as a volunteer fire fighter. He had always had a sense of dedication for others.

Russ loved spending time with his family and his church family. Russ has been an active member of the Abundant Life Church in La Marque where he volunteered with the technical team for the last eight years.  When he was not volunteering his time, he was spending it with his Grandchildren and family working in the yard and always making everyone laugh wherever he went.

He is preceded in death by his father, Carroll Cox.

A Celebration of Life Memorial Service will be held at 11:00 A.M. Monday, September 13th, 2021 at Abundant Llife Christian Center in La Marque.