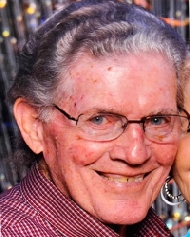 Roy Leon Harris, 90, passed away on December 7, 2021. He was born in Gruver, Texas on November 18, 1931, and grew up on a family farm nearby.  He was raised in a strong Christian home and received Christ Jesus as his savior at a very young age.  He remained strong in his faith in God and lived a godly life in accordance with that faith for all the days of his life.

He was raised in a musical family and developed his love of singing and playing the guitar at an early age.  He was also an outstanding high school basketball player and was offered a full basketball scholarship to play for Wayland Baptist University.  It was there that he met the one true love of his life, Alice Sivells in 1956.  They were married on January 24, 1957, a marriage that would last for almost 65 years. Also, while at Wayland he was a cheerleader along with his brother Dale, sister Rachel and future sister-in-law Patsy. In 1958, he received his BA degree in Religious Education with a minor in Music.

Prior to his marriage, he served for two years in the US Army during the Korean Conflict in 1953-1954.

He was known for his athletic and acrobatic abilities.  He could do standing backward flips, flips off a wall, ongoing handsprings, walk on his hands and numerous other stunts.  One childhood friend said that Roy was like a cat, always landing on his feet - even when getting thrown from a horse!

Roy and Alice lived in various places in Texas, New Mexico, and California before eventually settling in the Houston/Huffman Texas area where they raised their family and enjoyed their lives together for the past 55 years.

He has served in over 20 churches (including FBC Huffman) over his life as full-time or part-time music, religious education, or youth director.  For most of his career, he was an insurance agent and manager. In the early years, he was also a milkman, truck driver, rancher, farmer, and church furniture salesman.  But his first love was music.  He was known for his beautiful tenor voice.  Over the years, he sang thousands of solos and hundreds of duets with Alice, mostly in church services, funerals, and weddings.

During his years in the insurance business, he earned many trips that he and Alice were able to enjoy in places like Spain, Hawaii, Acapulco, the Bahamas, Washington DC, Canada, and other locations in the US.

The greatest joy of his life was being a husband, father, grandfather, and great grandfather.  He passed on his love of music and his musical talents to his children and grandchildren.  One of his favorite things in life was family gatherings with lots of singing and playing musical instruments which they did often.

He was a very even-tempered man.  None of his family can recall even a single time when he let a curse word slip from his lips.  The only time his family can recall him even losing his temper was when the boys almost set the garage on fire in preparation for one son agreeing to be “branded” by another son for $5.

Roy enjoyed many summers during his retirement years in Red River NM, where he and Alice served as Senior Hosts for the Red River Community House. They loved Red River so much that they bought a home there which became the center for many years of wonderful family gatherings and memories.

He is preceded in death by his precious daughter Dachelle Brown, sister Velma DeWese, brother Dale Harris and parents Ben and Beulah Harris.

In lieu of flowers, the family requests that donations be made to MD Anderson, in the fight against cancer.