add a candle »
Aug 21, 2021 To the McDaniel and Jones family, mama rose will truly be missed. Our weekly talks, and or face time w sade smiling. This is really hard for me. Sade and I spent every summer together , even though she was my cousin\'s bestfriend. Mama rose. I\'m still in disbelief Keita Evan Williams
Aug 21, 2021 My condolences to you and your family. May God keep his arms wrapped around the family!🙏🏾🙏🏾🙏🏾 Debbie Freeman
add a note » 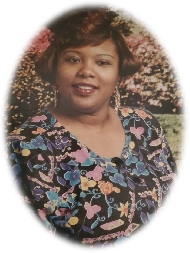 Roslyn Rose (Jones) McDaniel was born June 16, 1965 in Galveston, Texas to James and Ethel Ray. She was raised in the loving home of Charlie & Rosalee Miles. She was baptized at an early age at Calvary Missionary Baptist Church in Houston, Texas. At the time of her passing, she was a member of Galilee Missionary Baptist Church in Hitchcock, TX where she was a faithful member under the leadership of Pastor Darrell Glenn.

Roslyn ”Rose” McDaniel affectionately known as Rose attended Booker T. Washington where she was a member of the Baby Ocean of Soul as a flag girl. She graduated in 1984, and then she pursued a career as cosmetologist and seamstress. She later expanded her skills to the Home Healthcare Industry.

Rose was married to the love of her life Dennis Wayne “Moon” McDaniel on August 20, 2009. To this union they combined their families for a total of 15 children.

Rose never met a stranger that was not willing to help. If you knew her, you loved her. She took great pride in taking care of her family and friends. She would feed the city of Hitchcock if she could. She was known for finding great bargains and couponing.

There will be a public visitation held on Friday, August 20,2021 at 11am with a chapel service to begin at 12pm.

The family has asked that all attendees wear a face covering while attending the service.