add a candle »
Nov 22, 2021 My main man. My heart is broken. You took a piece of me when you left. Fly High young man. Forever in my heart Grandma
Nov 22, 2021 You are truly missed and loved Robert Perez. You have touched so many hearts. Watch over your family. Rest in peace nephew Aunt Shelby
add a note » 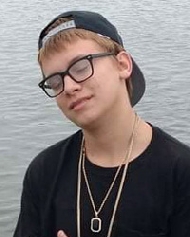 To the Perez Family and Friends,

In the time of your loss, Carnes Funeral Home would like to extend our deepest condolences. It is our honor to serve your family...

Our charismatic and BIG hearted son, brother, grandson, nephew and friend died Friday afternoon from an accident. Robert was a big brother to his deceased brother, Ray Ray who passed away at the age of one. He was also a BIG brother to his five sisters, Halee, Destanee, Ashlee, Nova and Avery. Robert always looked out for his sisters every chance he got. If he wasn’t looking out for them, he was telling on them. He found it his job to make sure they were taken care of. He loved them all whole heartedly.

Tiffany Perez gave birth to Robert on October 17, 2001 in Galveston, Texas. Robert took quick to being a Momma’s boy and a protector if you will. Robert and his Momma experienced some of life’s hardest challenges together; that made them so close. Robert had no problem showing his mother how much he loved her. He was quick to give her the tightest hugs he could. So tight that Tiffany would tell him, one day you are going to break my back. Robert liked teasing his mom and giving her a run for her money.

Robert was eight years old when Dionisio Perez Jr. became his daddy. He was quick to tell Dionisio to not hurt his Momma but wanted him there with him and his sisters. Robert and his Daddy formed a close relationship that only grew deeper as Robert grew up. Robert knew he and his sisters could count on Dionisio for anything no matter what it was. Robert was quick to share his feelings and thoughts with his Daddy as he did with his Momma. Robert didn’t always like the rules Dioniso set out for him, but he knew he was loved as Robert expressed his love often for his Daddy.

Robert had a girlfriend of two years, Nicki Engel at the time of his passing. Robert and Nicole had a fun and memorable relationship. Robert loved Nicole very much and looked forward to spending everyday with her.

Robert loved to fish, ride four wheelers, had a passion for guns, loved to go for rides and hangout with his family and girlfriend. He loved to laugh and have a good time. He had a smile that was big and could light up a room and a laugh that was contagious. Most importantly he loved deeply and was loved by so many people.