add a candle »
Apr 23, 2014 Thank you for loving me and choosing to be my dad. The man you are forever changed who I am. My memories will keep you alive in my heart. You are a great man. Love always, Paula Dean Paula Browning
add a note » 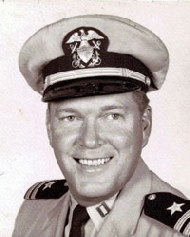 Retired Commander Robert E Browning, 84, formerly of Hanover, New Mexico, passed away suddenly Tuesday, April 8th, in Texas City, Texas. Cmdr. Browning served thirty years in the United States Navy aboard various carriers during his career. He was instrumental in forming the Santa Rita Volunteer Fire Department, was the fire chief for a number of years before turning the reins over to the current chief. He was a former member of the First Presbyterian Church of Silver City and was a Shriner.