add a candle »
Oct 7, 2021 I met Rick at St. Agnes Academy, through our mutual interest in Golf. Both of our daughters were on the Golf Team, and we talked golf often and supported our girls. Rick will certainly be missed by all that knew him. God Bless you Buddy,
Vic Caso
add a note » 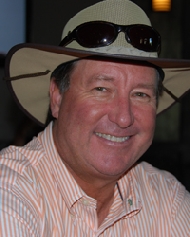 Rick Dale Baty, 63, of Houston, Texas passed away on September 30,2021. He was born on May 20, 1958 in Indianapolis, IN to Benjamin Thomas Constantine Baty, Jr. and Bonnie Fae Hardin Baty. Rick was a longtime resident of Houston, Texas. He graduated from Dickinson High School in 1976 and Stephen F. Austin State University in 1981 in Finance. In 1986, while already on his trail to being a successful insurance entrepreneur, he met the love of his life, Kathryn Marie Overstreet. They were married in 1987 and spent 34 loving years together.

In lieu of Flowers, the family kindly asks for donations to the following organizations: