add a candle »
Jan 20, 2019 why was his body so hard and so pale and why cant we see his feet ale hernandez
Nov 3, 2018 Richie was a joy to be around and was a great person to work with. Will miss working with him. My condolences to his family. He was a good man. Steve Simmons
add a note » 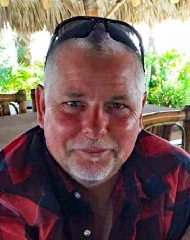 Richard Darrell Bingham was born in Greenville, Mississippi on August 9th, 1963. He passed away Monday, October 29th, 2018 at 55 years of age in Bacliff, Texas.

He is preceded in death by the two people in the world that he cherished with all of his heart, his “Ma” and “Pa”, Richard William and Flossie Ivy, and his stepson.

He is survived by his beloved wife Laura H. Bingham, his 8 children and 27 grandchildren, his mother, Marion Jones Ivy, and his brother and sister.

Richard was a longtime resident of Seabrook, Texas. He graduated from Clear Lake High School in 1982 and went on to attend Louisiana State University. Richard also coached and umpired for Bayside Little League.

Richie will be remembered as a kind, honest and confident man. A man who was fair at all costs, who loved to win, but didn’t mind losing either. He loved to have a good, relaxing time, but also had a competitive side. Whether he was playing washers with his best friend, or watching his #1 team, the LSU Tigers play football, he was happy. He lived for his wife and adored his kids and grandkids. He took his role as a “papaw” seriously and was known to spoil and sugar up his grandkids every chance he got, always keeping a jar full of candy or cookies for them.

Richie was a simple living man who enjoyed floating down the Frio river and listening to his favorite Red Dirt music with his wife and lifelong friends. Most days you could find him wearing a LSU or Astros t-shirt, cargo shorts and flip flops, reading a John Grisham book and drinking a craft beer. He was the kind of man who took value in a simple “good morning” and spread positivity around every day with his inspiring or funny quotes and meaningful song lyrics.

He will be forever loved and remembered by his wife, who was his best friend and entire world, his kids, who made him proud, his grandchildren, who gave him absolute joy, and his friends, who gave him laughter and loyalty.

Rest In Peace Richie, we love you.

The family will greet guests starting at 2:00 p.m. on Saturday, November 3rd, 2018 at Carnes Funeral Home - Texas City with Memorial Services will began at 3:00 p.m.