add a candle »
Feb 24, 2015 So sorry for your loss. Words cannot express the pain we feel when we lose those we love. My prayer is that you may find comfort through God's word, the Bible.(Isaiah 25:8) May you have peace during this time of great loss. Alicia
Jan 15, 2015 We will miss you Richard. Thank you for the times you helped me at my home. Praying for the family during their time of loss. Clara Holcomb
add a note » 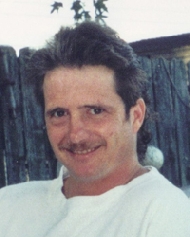 Richard Allen Reazin Jr., 49, was taken from this life and his family suddenly on January 9, 2015, as a result of a hit and run accident in Texas City, TX.

Richard was born on January 31, 1965 in Galveston, TX, to Richard Allen Reazin Sr, and Jackie (Meadows) Reazin, to whom he was very close.

Richard was a painter by trade and an outdoorsman by heart.  He never met a stranger and could and did talk to everyone.  His smile was infectious and there was never a kid in the family that he couldn’t make smile.  Richard was the GO-TO guy for any home project and his craftsmanship is well documented in the homes of many family members.  Richard loved the outdoors, be it fishing, hunting, or building a fire, he had it all covered.

Due to his closeness in age to many of his nieces and nephews he was more of a brother than an uncle.

Richard is preceded in death by his father, Richard Allen Reazin Sr. and his brother Charles Darcy Bradshaw.  He is survived by his mother Jackie (Mary Ida Meadows) Reazin, his brother Jimmy (Jimbo) Bradshaw and three sisters, Mary Ann (Kovacevich) Sealy and husband Kenneth, Wilma Kay Denney and husband Roy, and Jackie Lynn Simons.  He has many nieces and nephews that loved him and will miss him immensely.

There will be a “Celebration of Life” ceremony at Gulf Coast Four Square Church at 6205 Delany Rd., Hitchcock, TX on Thursday, January 15, 2015, at 6pm.  Arrangements are in the care of Carnes Funeral Home in Texas City, Texas.