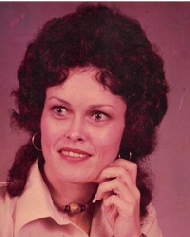 Rony was a longtime resident of Henderson, Texas before relocating to Texas City with her husband, Bernardino Hernandez.  She was devoted to her three beloved Pomeranians:  Geri, Dixie, and Tater.  In her free time, she enjoyed sewing and crocheting.

Initial viewing will take place from 1-1:30pm on Saturday, August 28, 2021, in the chapel of Carnes Funeral Home, 3100 Gulf Freeway, Texas City, Texas 77591.  Funeral Liturgy Outside of Mass will be celebrated at 1:30pm by Deacon John Carrillo of St. Mary of the Miraculous Medal Catholic Church - Texas City.  Viewing and Visitation will continue following the Liturgy until 4pm.