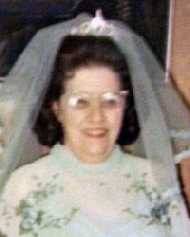 Rexie Muriel Wright went home to our Lord on February 27, 2014 with her family by her side at Memorial Northeast Hospital.

Muriel was born March 18, 1921 in New Hall, WV to Marion Franklin and Nannie Inez Stanley. She meet her husband William “Bill” Wright and married on October 31, 1942. They moved from WV to Texas in 1949 with two of their children. Muriel went to work for USO while she lived in WV and then for LB Price when she moved to Houston, TX as an office manager until she retired. She became a member of the Odd Fellows and Rebekahs in June of 1956. She was the Secretary for Santa Rosa Rebekah Lodge #263 until she retired. She was a 59 year Rebekah when she went home.

She is preceded in death by her husband Bill Wright and Granddaughter Rosemary Warren and her father, mother and brothers and sisters.