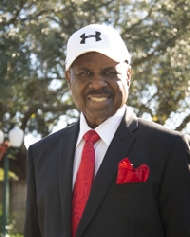 Rev. Ernest North, Jr. passed from earth to glory on September 2, 2021, at the Kindred Rehabilitation Center in Webster, Texas. He was born into a loving family on December 2, 1950 in Shriner, Texas. His parents were Ernest North, Sr., and Bernice Curtis North. Ernest was the oldest of nine children. As the oldest child, he developed a keen sense of responsibility which he carried into his adult life.

At an early age, he committed his life to Christ. His walk was always a serious one, with him involving himself in Church activities and ministries finally culminating in accepting his call to the Gospel Ministry. He was a committed member of the Greater New Hope Missionary Baptist Church for over 20 years, always willing to contribute his talents and time. He loved and supported his Pastor. He also participated with and assisted the Brotherhood ministry.

Rev. North graduated from E.E. Worthing Senior High in Houston, Texas, in 1970. He immediately went to work upon graduation from high school in a cement factory. He ended his career with the Texas Department of Public Safety as an inspector.  His marriage to Alicia McKinney followed soon after graduation from high school. He had four children, and he was passionate about family becoming a loving grandfather.

Ernest was married to Juwanda Jones on December 31, 2019. They were married for two and a half years. Their life was filled with love, laughter, and joy.

Ernest was an avid basketball fan, having played basketball in high school. He never lost his passion for the sport as well as other sports.

He was preceded in death by his first wife – Alicia, his mother – Bernice, three brothers – Larry and Kyle North, and Derrick Lair.

The funeral service will be held at Greater New Hope Missionary Baptist Church, 1725 Highway 3, League City Texas where he was a member of the ministerial staff. The Services will be at 12noon on Saturday, September 11. Public viewing will be from 11 am until 12noon.  Officiating the Service will be Dr. William H. King, III, Pastor. Burial will follow the funeral at Forest Park East. Funeral arrangements are being handled by Carnes Funeral Home.