add a candle »
Sep 12, 2021 I will never forget the advice, lectures and kind words I always received from Pete! He was a true joy to know and I can truly say I was blessed to know him just about my whole life. Love and Hugs Heather Lane
Sep 11, 2021 Reminiscing of our high school days together brings countless great memories - memories that have always been treasured and memories that always will be. Sincere and heartfelt condolences to Donna, Jenna, all other family and all his friends. Frank Willey
add a note » 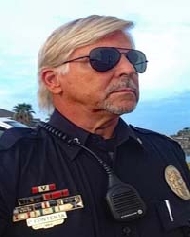 Peter was born in the Berkshires of Massachusetts on January 28, 1957.  He graduated from Lenox High School in 1975 and worked for a landscaping company, and then later Price Chopper.  On November 19, 1977, he married his wife Donna.  He was Donna’s high school sweetheart.  After moving to Texas in February 1978, Peter worked for Safeway Supermarkets.  The following July he and Donna welcomed their daughter Jennifer, who quickly became the center of his world.  Family was everything to him.

Pete was a man with many interests over the years and a well-known hobby pusher.  His passion was scuba diving, but he loved riding his Harley, fishing, shooting and was a flying powered Para plane instructor.  Peter was service minded and was a proud patriot who loved his country dearly. He was a spiritual man, and although not much of a participant of organized religion, he had a relationship with his savior Jesus Christ.  Peter loved his friends and family dearly.  He was the most loyal friend you could find.

In lieu of flowers please consider donating, in remembrance of Peter, to one of two charities he loved most: The Wounded Warrior Project:  or the W.A.V.E.S Project.