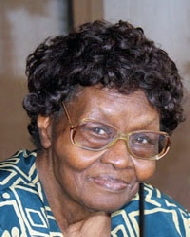 Oddie Lee Brown, born in Tucker, Texas to the late, Lela and Will Brown on January 24, 1928, entered eternal rest on Wednesday, January 13, 2015.  In 1960, she moved to LaMarque, Texas with her sister, Juanita and brother-in-law, George.  She was a member of Hines Memorial COGIC under the leadership of Supt. Harry Allen, where she faithfully attended until failing health prevented her from doing so.  She was employed by John Sealy Hospital (now UTMB) for nearly 40 years.