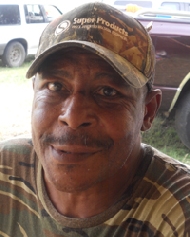 He attended local HISD schools class of 1976 Ross Shaw Sterling Senior High, as a celebrated athlete and loved by many in the community. Our brother Mikel met and married his high school sweetheart Loretta Faye Cooper on April 19, 1976. From this union three beautiful children

were born Michael Jr., La Shawn and La Tisha. He was employed as a teamster for Fleming Foods, Grocery Supply and Walmart. A hard working team player and a great dad. A child at heart, a good teacher and instructer full of patience and kindhearted.

A loving and dedicated husband, stern and loving father, a strong, confident, reliable brother , friend and son. The life of the party , easy going and talented . A jack of all trades and known all over the city. Although he had many regrets in life, he often times expressed his gratitude and thanks toward his loved ones. A commited grandpa with enduring qualities of nurturing. An amateur fisherman, hunter and all out sportsman.

Michael made his confession of faith at an early age and was baptized into the household of faith at Bella Vista Missionary Baptist Church. In the year of our Lord 2009, he re-dedicated his life to Christ and was baptized as an adult at The Kings Table Christian Discipleship Church where he was a member until his home going.

He proceeds in death grandparents, Pearley Sr. and Lenora Jones, Norris Barnes and Jennie B. Newton; parents, Pearley Jr. and Kathyleen Jones; father and mother-in-law, Eddie and Evelyn Cooper; wife, Loretta Cooper Jones; sister and brother-in-law, Will and Kathyln Phillips; and a host of uncles, aunts and cousins.