add a candle »
Sep 11, 2021 🥺. I’ll miss you my brother. Thank you for the love and laughter that you put in my life every time I saw you. My condolences to your family and loved ones. ❤️🥺 Hedson Lujan
Sep 8, 2021 It\'s hard to believe that someone full of life has left this earth. My God, you will be missed! My condolences to Debbie and the Harris family, God bless!!! Dr Melony L RILES
add a note » 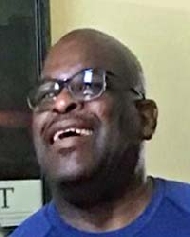 To the Harris Family and Friends,

Mike Harris was born on November 16, 1954, in Morehouse Parish, Louisiana and passed away suddenly on August 19, 2021 in League City, Texas.

Mike graduated from Soldan High School in 1975 and attended Harris-Stowe College where he played basketball. He honorably served his country in the United States Army which took him to Germany where he resided for more than twenty-five years. Because Mike made so many friends while there, he remained in Germany after his professional basketball career ended and worked for the Department of Defense.

He had a host of family and a wide circle of friends - from all walks of life.  He had the unique ability to connect with everyone.  Mike was so welcoming, he had friends wherever he went. Because of his big personality – no matter what event he attended; people flocked to Mike. Mike’s sense of humor brightened many people’s lives.

Mike was always involved in his children’s lives.  Family was precious to him, and he lived his life passionately.  He coached and mentored many young athletics in various sports leagues throughout the years. Because Mike remained connected with the youth he coached, many would return years later to thank him for his guidance.  Originally from St. Louis, he was a proud St. Louis Cardinals fan - no matter where his residence.

In lieu of flowers, Memorial Donations, by check, may be made to the Clear Springs High School Athletic Program, c/o Coach Renfro Fund in honor of Michael Harris, 501 Palomino Lane, League City TX 77573.

My mission in life is not merely to survive, but to thrive; and to do so with some passion, some compassion, some humor, and some style.

BY MAYA ANGELOU
You may write me down in history
With your bitter, twisted lies,
You may trod me in the very dirt
But still, like dust, I'll rise.
Does my sassiness upset you?
Why are you beset with gloom?
’Cause I walk like I've got oil wells
Pumping in my living room.
Just like moons and like suns,
With the certainty of tides,
Just like hopes springing high,
Still I'll rise.
Did you want to see me broken?
Bowed head and lowered eyes?
Shoulders falling down like teardrops,
Weakened by my soulful cries?
Does my haughtiness offend you?
Don't you take it awful hard
’Cause I laugh like I've got gold mines
Diggin’ in my own backyard.
You may shoot me with your words,
You may cut me with your eyes,
You may kill me with your hatefulness,
But still, like air, I’ll rise.
Does my sexiness upset you?
Does it come as a surprise
That I dance like I've got diamonds
At the meeting of my thighs?
Out of the huts of history’s shame
I rise
Up from a past that’s rooted in pain
I rise
I'm a black ocean, leaping and wide,
Welling and swelling I bear in the tide.
Leaving behind nights of terror and fear
I rise
Into a daybreak that’s wondrously clear
I rise
Bringing the gifts that my ancestors gave,
I am the dream and the hope of the slave.
I rise, I rise
I rise.
Quote by Maya Angelou:
And when great souls die
After a period peace blooms
Slowly and always irregularly.
Spaces fill with a kind of soothing electric vibration
Our senses, restored never to be the same, whisper to us.
They existed. They existed.
We can be. Be and be better.
For they existed