While I haven\'t met you personally, I couldn\'t help but share my deepest condolences and let you know that you are on the minds of many. My heart is heavy for you in your time of loss. I hope that scriptures like Revelation 21:3,4 & John 5:28,29 prove to be as a great comfort to you as they have to many. As you read those scriptures, just imagine what life will be like- especially imagine a reunion with your dear, Michael. May you hold close these promises from God. This article has brought comfort to many others I’ve spoken to and I hope it does the same for you. https://www.jw.org/en/publications/magazines/wp20150801/the-resurrection/

Much love,
Kensey
Kensey
Nov 10, 2017 A day hasn\'t went by since the day you left this world that my heart has just been filled with such sadness, you will be missed and know that you are loved by so many RIP baby XOXOXO
Aunt Kim Mcmillan
add a note » 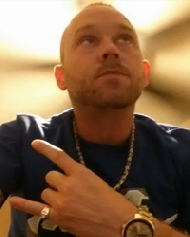 to Michael and Sandra Brown. He left this Earth on November 2, 2017 on his 34th Birthday

Michael was born on November 2, 1983 at 11:57 p.m. we had a name picked out for a boy and girl as we chose not to know the gender his name was supposed to be Jonathan Brown however when his Daddy saw his face he immediately said he will be named a Jr because he looks just like me. That was the happiest day of our life. Michael has brought so much joy to our life. He is such a gentle soul, he has a heart of gold, he would help anyone and put everyone else’s needs above his own. Michael suffered tremendously from the loss of his Brother Kevin, that was a loss that none of us could have ever imagined and we pushed ourselves daily to deal with his loss. Michael loved animals, hunting, fishing and family.

A visitation will be held on Friday, November the 10th from 3:00 P.M. to 4:00 P.M. at Carnes Funeral Home, Texas City, TX with  a Celebration of Life service to follow at 4:00 P.M. Reverend Benjamin Pounds officiating.