add a candle »
Oct 29, 2013 Beautiful man on the inside just as you were on the outside. Your smile would light up any room and dispel any negativity. I'll miss your kindness and grace you showed to all that came near you. Peace. Wayne
Oct 29, 2013 Your painful body is gone, your soul is a peace and your spirit is with us always. Until we meet again. . . . . Love You Mom
add a note » 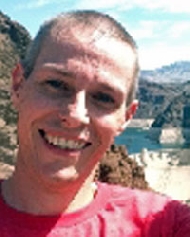 MATT SPARE, 42 of Katy, Texas smiled his last smile and passed on peacefully, comfortably, stress free and in the arms of his loving husband Aaron Patterson shortly after a visit by their 4, four-legged children, Poodle, Reba, Penny and Uncle Si, on Friday, October 25, 2013.  Matt fought a brief but valiant battle with liver cancer.

Matt and Aaron became friends in 2008, became a couple on June 3, 2010 and legally married each other on September 17, 2011 in Washington, DC. Since they have been together, they traveled to Disney World and after they married, they were able to travel to New York City and Las Vegas for their anniversaries. They bought their dream home and lived life to the fullest, happy and made lasting and loving memories together.

Matt and Aaron were involved in the Houston GLBT community and raised thousands of dollars through fundraising activities.  Matt was known for his wonder smile, his sense of humor, his love for moose, and his caring nature.  The Houston GLBT and world has lost a great man, but has gained another angel to watch over us.

Matt was Aaron's best friend, soul mate, and husband and the time they spent together were the best years of their lives.

Besides his husband Aaron, Matt leaves behind his "children," Poodle, Reba, Penny, Uncle Si and Sheldon the hamster.  He also leaves behind his caring and loving in-laws, Karl and Sylvia (Niedzwiecki) Patterson, of Silver Creek; also his brother-in-law Rob (Michelle) Patterson, niece Nicole and nephew Chase Patterson of Cary, NC; and an extended in-law family.

Matt leaves behind a huge "chosen family" and friends in the Houston area and across Texas and the United States.

Matt also leaves behind his mother, Phyllis, sisters Chris and Carol, nieces and nephews and a great-nephew.

Matt has gone to join his father Bill, his baby dog Seven and hamster Leonard, along with many friends who have gone before him.

In lieu of flowers, donations can be made to Aaron Patterson, who will distribute donations at his discretion.