add a candle »
Dec 29, 2017 We were so saddened to hear of Mark\'s passing. Will always remember the crawfish boils and the fun that he had throwing them and trying each year to make it even better. Charlie loved working with him and he will definitely be missed. Our thoughts and prayers are with your family in this time. Charles Gurnea and Donna Papa
Dec 23, 2017 It was always a laugh and fun times hanging out with Eddie and his family and Mark was one of the funniest! Thank you guys for always being so kind and thanknyoubTheresa for sharing you beautiful family with me durning thatbtime. He will be greatly missed! The love you guys shared was an inspiration to others around you and Mark. Love you guys and be blessed! Adela G
add a note » 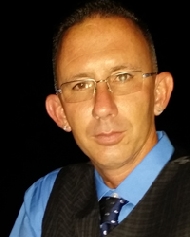 Mr. Mark Anthony Gagne passed away from this life on Tuesday, December 19, 2017 in Texas City. He was born on October 19, 1971 in Attleboro, Massachusetts. Mark was a resident of Texas City since 1996 although he grew up in Santa Fe. Mark loved being with his family and friends. He was always happy and a had a smile on his face. He enjoyed riding his motorcycle with his wife Teresa of 26 years. He loved to talk sports and attend sporting events with his son Dominic and he loved spending time with his daughter Marissa taking selfies sometimes even with filters. He recently became a Pop-Pop to his granddaughter Penelope. He loved to cook and entertain his family and friends. And you would know this is you ever had his famous crawfish he perfected over the years at his annual crawfish party. He worked for the City of Texas City for many years where he met some of his best friends that he referred to as his brothers.

He is preceded in death by his parents, Charles Joseph and Evelyn Mary (Yelle) Gagne and his brother Scott Francis Gagne whom he greatly missed. He is survived by his wife Teresa, son Dominic and his fiancé Victoria Buenrostro, his daughter Marissa, his nephew Robert Guerrero that he loved like his son, and granddaughter Penelope Rae Gagne of Texas City, his sister Ann Edmundson and husband Aubrey. His brothers James Gagne and wife Tina and Robert Gagne and wife Nora of Santa Fe and numerous nieces and nephews and extended family.

A funeral service will be held on Wednesday, December 27, 2017 at 11:00 AM with a service to celebrate his life at 12:00.  Both will be held at Carnes Funeral Home, 3100 Gulf Freeway, Texas City, TX 77591.  Internment will immediately follow at Mount Olivet. All will be officiated by his nephew, Kristopher Edmundson.

The family requests that all guests wear white in honor of Mark.