add a candle »
Apr 15, 2013 Your mom was such a special lady and I know that she is in heaven looking down on all of you.
Lots of love. Diann Smith
Apr 15, 2013 Blessings to the Jones and Henderson families. Doyle Alumni
add a note » 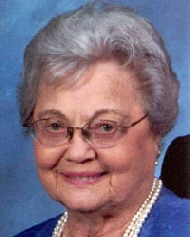 Marie Jones, 86, long-time resident of Texas City, Texas, passed away April 10, 2013.  Her earthly journey has ended and her heavenly journey has begun.

Marie was born September 9, 1926, in Walters, Oklahoma to N.H. and Laura Bailey Henderson.   She grew up in Doyle area and attended school at Burrwood, Stone & Old Doyle Schools.   In 1953 she married Joel O. Jones.  The Jones’ moved from Duncan, Oklahoma to Texas City, Texas, in 1968 and became members of the First Baptist Church.  She worked at John Sealy Hospital in admitting and Western Geophysical and donated her time to the Women’s Crisis Center of Texas City, Texas.  She left her position at Western Geophysical to support her youngest son, Roy Jones, in starting his new business, Mainland Tool & Supply Inc.,   Marie enjoyed camping and fishing and was a Houston Astros fan.  She was a loving mother of six children, fifteen grandchildren and fifteen great grandchildren to whom she devoted much of her time.

She fought the good fight, she finished the race, she kept the faith.