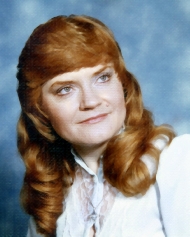 She was preceded in death by her father, Hersel Oliver. Margie is survived by her husband, Richard Goetz; her daughters, Angela Benazouz and her husband, Adam of Colorado Springs, CO and Kayla Seerally and her husband, Nick of Houston, Texas; her mother, Ruth Oliver of Topeka, KS; her sisters, Alberta Kleitz of Kansas City, KS, Doris Arwine of Garden City, KS and Norma Turley of Topeka, KS; many nieces and nephews; and of course, her pets, Maria and Rocco.

Margie grew up in Garden City, KS. She graduated from Garden City High School.  She moved to Houston to attend Gulf Coast Bible College and resided in Houston, Texas. She married Richard Goetz on November 26, 1983. Before her illness, she worked as an account manager at Landata,  Inc;  a division of Steward Title Company. She felt called to the mission field, but was unable to complete that goal.  Her mission in life became working with kids. She provided after school child care services.  She also had a neighborhood outreach which was named “Kool  Kids for Jesus”. She was a member of New life Church on Hammerly Road, which was formerly called Bread of Life Church.

In lieu of normal remembrances, friends who wish may make memorial gifts to the organization of their choice.