add a candle »
Sep 12, 2021 Lord, I thank you for the assurance of salvation you have given to my aunt. I can picture your open arms waiting to hold her, and your words, “Well done”. We all have received a blessing of your love through her. Help us to continue her legacy by sharing and showing God’s love with those around us. Tom Newton
Sep 8, 2021 My deepest condolences to Don and his children.
Mick may you always Rest In Peace. Irma Rodriguez
add a note » 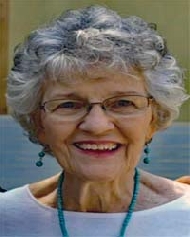 On September 4, 2021, God’s angels came down to earth and escorted Margarete Ann (Mick) Krenz Wiggins, 84, of Texas City, Texas to Heaven where God was waiting with open arms. Mick was born on January 25, 1937 in South Coffeyville, Oklahoma the 8th of 11 children to Leopold Krenz and Selma (Schwann) Krenz. She graduated from Lenapah High School in 1954 and moved to Texas City to work where she met Donald (Don) Wiggins and was married March 2, 1956. She was a homemaker until her children went to school and retired from Sterling Chemicals. Mick loved gardening, quilting, golfing and volunteering for the Braille workshop at church. She enjoyed making her famous cinnamon candy for those she loved. She loved the Lord and her family was the most important thing to her.

She is preceded in death by her parents, sisters, Gertrude Stager and Dot Whicker and brothers, Richard, Leo, Ernest and Eddie Krenz.

A Memorial Service will be held at Peace Lutheran Church in Texas City on Wednesday, September 8 at 1:00.

In lieu of flowers, a donation to MD Anderson can be made in her name.