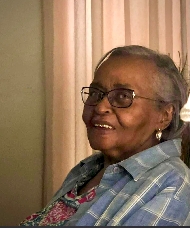 Mable was born in Roans Prairie, Texas to Charlie Smith and Cora Roan Smith.  She attended school in Navasota, Texas.  She married Earnest H. James, Sr. and to this union three children were born, Alberta James (Brooks), Everlola James (Bell) and Earnest H. James, Jr.  After her marriage the family moved to Galveston, Texas in 1948.  Mable was employed at UTMB and worked as a nurse’s assistant in the labor and delivery department for 18 years.