add a candle »
Nov 21, 2021 Our deepest condolences to the family.
Always in our our thoughts and prayers. Leticia Ramos
Nov 19, 2021 Aunt Lydia: I love you and will miss your amazing smile, laugh and sense of humor the most. Eternal rest grant unto them O Lord, and let perpetual light shine upon them. May their souls and the souls of all the faithful departed, through the mercy
Of God, Rest In Peace. Amen. Josie Flores Mejia
add a note » 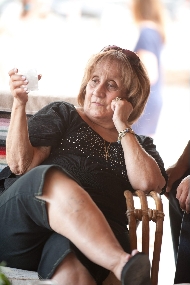 Lydia F. Lira passed from this life November 15, 2021, in Texas City, TX. She was born in her parents Texas City home on January 19, 1932, to Phillip and Josephine Flores. She grew up in Texas City with two sisters – Mary Luz, Lenida, and her brother Phillip Jr., along with her brother, David, and sister Irma in her teenage years. They lived through the 1947 Texas City Disaster that took the lives of several family relatives; some that were actively fighting the ship fire, and some that had gone down to the docks to see what was happening. She would tell us stories of her family home being damaged in the blast and of having to seek refuge at the old Blimp Base in Hitchcock before they were allowed back into the city again. The day of the explosion, she vividly remembered playing around the front porch when the blast occurred. That was the only place she was allowed to go by her Dad, who didn’t let her follow the other kids that went to the dock area.

In her first marriage to Armando R. Lira, she was a mother to four children whom she dearly loved with all her heart. She had that mom knack for whipping up a feast in no time for us and even our friends who would often tag along. Every bit of it was delicious. Desserts were that way too. From her lattice-work pumpkin pie to her decadent pecan pie it was all good; but our favorite was her lemon-meringue pie. It had a homemade crust and sweet, egg-white-whipped meringue; she had to make a couple at a time to keep the peace in the family. She was a hard-worker and did not suffer fools lightly. However, if you were her friend, you were that for life. She made a career of working for big box grocery stores in their meat markets as a meat wrapper. She could sling loaded meat trays to put into display coolers with the best of them. She always brought home the best meat cuts for dinner. Only thing was, she liked her meat well done and always made it that way when she cooked. For years, we never knew steak could taste so good (when it wasn’t well done) until we had it over at our friend’s houses.

We will always be grateful for her selfless nature, as evidenced by the numerous stories we continue to hear of her kindness to them in their time of need, and loving demeanor when it came to her children, grandchildren, and great grandchildren. Her transition to a better place leaves a huge void that will be hard to fill. We will always remember her as “Pretty Grandma”.