add a candle »
Jul 22, 2021 Lucy\'s love for her family is everlasting. Her beautiful soul and her kindness lives on in everyone she touched. My deepest sympathies for her family and friends at this time of loss. Love always, Barbara Acuna
Jul 21, 2021 Memories
Forever in your heart her love will always be.
In you mind is stored all the fond memories.
May you gather strength within your family\'s bond.
Remembering to cherish her memories with friends and loved ones. Detra Levige
add a note » 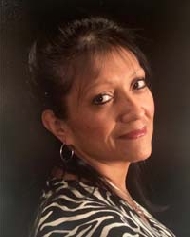 Lucy was a lifelong resident of Texas City, Texas and a member of the Texas City Congregation of Jehovah’s Witnesses. She was a beloved wife, mother, sister, and MiMi to her 3 grandchildren.

Some of her favorite things were sitting pool side watching her kids and grandkids, family seafood boils, watching the Astros, attending her weekly congregation meetings, Elvis Presley, and spending time with her large extended family.

She is proceeded in death by her father Gene H. Valdez and father and mother in-law Harold and Berniece Hatfield.

Lucy’s family will receive visitors in the chapel of Carnes Funeral Home, 3100 Gulf Fwy. in Texas City from 4-6pm on Friday July 23, 2021.  Lucy’s memorial service will take place from 6-7pm.

The family would like to thank the nurses and doctors at HCA Houston Healthcare Mainland for the exceptional care she received.

In lieu of flowers, the family and friends who wish to send memorial gifts can donate in memory of Lucy to : the American Diabetes Association (donations.diabetes.org)