add a candle »
Apr 13, 2016 Extending sympathy to Lucy's family. I worked with Lucy during several elections. I always enjoyed her wit. Ruby Wulf
Apr 12, 2016 Extending deep and heartfelt sympathy to the family. Lucy was a wonderful lady and will be missed. Tia Chona Compean and Family
add a note » 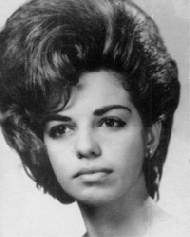 Lucy Compian Vasquez, 74, passed away April 6, 2016. She was born in Galveston, Texas to Joe Compian and Mamie Orozco on September 12, 1941. She is a member of Queen of Peace Catholic Church of La Marque. She was married to her first husband, Carl Franklin Hall. They had twenty-three bridesmaids and groomsmen at St. Mary’s Cathedral in 1965. Of this union, they had two sons, Christopher Derek Hall(Joann) and Carl Franklin Hall(Kimber); six grandsons, Craig, Carl, Cody, Cy, Kyle and Connor Hall and granddaughter, Carena Hall.

She was retired from Eibands after thrity years. Her favorite morning stop was McDonalds. She enjoyed spending time with her grandchildren and traveling. Lucy also worked part time for Bridal Blessing for ten years where she traveled to all the Bridal Markets with her sister. She added pearls and beading on gowns and dresses, and designed many of the veils.