add a candle »
May 7, 2016 I will miss my daughter-in-law so much. She was a fighter and she had so much love in her. Lori changed my son life for the better and for that I will always love her. Lori loved her some Nelson Harper. She named me ML aka Mother-in-law. Miss you and love you always. Shirley Harper
May 6, 2016 I will miss Lori and all the good memories we had from the days of dancing at Skeeters Lounge in Eagle Lake down by Wharton. She helped me so much when Quanifa put that baby on me. Thank God for such a righteous woman full of love understanding and softness. Darneisha Smith
add a note » 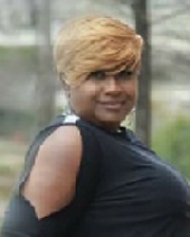 Mrs. Lori Shanelle Overshown-Harper, 39, daughter of Bennie and Linda Overshown, was born December 6, 1976 and departed this life on Tuesday, April 26, 2016 at home with family in Texas City, Texas.

At an early age she accepted Christ and attended Mount Pilgrim Baptist Church in Galveston, Texas and later joined Willing Workers Baptist Church with her children.  She also established a close bond with the Greater Macedonia Baptist Church where she continued to grow in Christ alongside her husband.  She attended school in the La Marque Independent School District and completed her studies in cosmetology at Royal Beauty Careers.  Lori was well-known in her community and region as the “braid queen” as she was dubbed in her early teens.   Even in the midst of her battle with cancer, Lori maintained her upbeat personality, and love for all things of beauty and fashion.