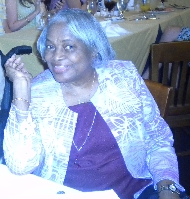 Lois Evon Clay was the last of five children born to R. L. Clay and Roena McGrue Clay in Houston, Texas, on October 17, 1929.

Lois entered into marriage with Robert M. Kilgore, a union which produced two daughters, Crystal Laverne and Donna Lorene. She then married Marion Roosevelt Gipson, Sr., and had four sons: Fredrick Martin, Marion, Jr., Alvin Lloyd, and Darryl Clayton, Sr. She and “Gip” were faithfully married until his demise, at the age of eighty-three, in 2009.

She was a member of and regularly attended New Faith Church, in Houston, Texas, until illness prevented further attendance.

The last of the Clay clan, she was preceded in death by her parents; her sister, Mrs. Clara Joseph and her brothers, James and Alvin, all of Los Angeles, California; and her brother Alfred, who met his demise when she was a child; she was also preceded by her husband and son, Marion R. Gipson, Sr. and Jr, and her grandson, Darryl C. Gipson II.

Lois Evon Clay Gipson was called “Mom” or “Grandmother” by a number of her children's and grandchildren's  friends and relatives, as well as neighbors, and they visited her often during holidays and celebrations. Her door was always open to any who needed her and she was showered, in return, with gifts, words of praise, and words of comfort as she endured hardships, illness, and losses in  life.

Although she lived until the ripe age of 91, her passing was still difficult for her family to bear, and we will cherish her memory until eternity.  We could not have wished for a more loving, compassionate, and dedicated soul.

In the words of William Cullen Bryant,it is our wish that she,“Soothed and sustained by an unfaltering trust” may“approach her grave like one who draws the drapery of her couch about her and lies down to pleasant dreams.”