add a candle »
Jan 1, 2015 Love you miss you everyday I know your with us but not the same Merry Christmas and Happy New Year Donnie and Velda send their Love too. Vicki
Dec 2, 2014 just wanted to say how much i miss you dad. could definately use your advice. i miss you more than anything. daughter
add a note » 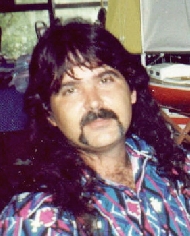 Larry was born July 11,1957 at Jefferson Davis Hospital in Houston, Texas to parents, Edna and Kenneth. He was the 3rd child born to them. He lived in Wichita, Kansas until the 6th grade when his parents moved back to Texas. This is where he formed life long friendships with the Sawyer's and Lancon's.

He attended Dickinson schools through the 10th grade. He was an excellent student and got discouraged in his 10th grade math class because of lack of interest from the teacher to anyone in the class. The lessons would be on a overhead projector and the teacher didn't want to be bothered with questions from any of the students so Larry walked out and went and received his G.E.D. His girlfriend at the time also wanted to see other people and broke up with him which broke his heart so he made the decision to join the Army.

He was in the Army in Washington for three years. He was a Supply Sergeant and hated every moment of it. He had been promised when he signed up that he could be in special intelligence; but that was a blind promise like most recruiters give you when you sign up he came to find out. He did make some good friend in the Army and for a time were still in contact with them.

He was honorably discharged in May of 1980.

He came back to Bacliff and immediately found his old friend, Ronnie Sawyer who by accidently introduced Larry to me (Vicki). Ronnie came by my apartment to get his hair cut. I was a hairstylist for Visible Changes at the time. From that time on we dated and were married in October of 1980. My father was a Senior Piping designer at that time and made the decision if Larry was to be a part of my life he needed to have a profession. At least one that paid better than any of the other jobs that Larry was doing. It was very hard to get employment at that time and Larry went Texas Pipe bending to start a drafting career.

The very next summer we had our first child, Sean. Larry was very careful with him. He loved his family and worked very hard to give us the best life he could. He progressed in the Piping Field over the next ten years and stayed at Celenease until his recent death. Ariel, our daughter was born in 1991, wrapped Larry around her finger he dearly loved her. They enjoyed scary movies, comic  characters and music. Larry was also an avid in Karate. He and Sean received there orange belt at Al Garza's Karate School, neither one of them wanted to spar and stopped going. Larry was excellent in numchucks and swords and he knew many Kata's. As a family we were very tight knit and enjoyed many things together. We would go to the Sawyer Family reunions with Donnie and Velda and knew the family's there very well and always had a great time. We enjoyed swimming, camping and family get together and parties.

In the later years Larry was tormented with the disease of Alcoholism. He did join AA and was sober for 2 1/2 years until the demons came back. It was a sad and emotional strain on all of us for many years knowing there was nothing we could do, but watch him kill himself. Unfortunately, it happened on November 27th 2013. I just want everyone to know that there is help with addiction and it can be found through AA and Al Anon. Don't be scared to attend these meetings because the people who attend have been there and know how to help you, I thank Al Anon for the help they give me and the help AA gave Larry.

We are very sad to have lost Larry. He was one of the kindest, soft spoken, intelligent, creative and, loving person I've ever known. I love him deeply and will miss him every day for as long as I live. Ariel and Sean will too.

LOVE YA DEAR...GLAD YOUR NOT SUFFERING ANYMORE AND IN A BETTER PLACE!