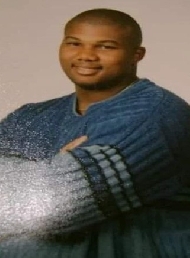 Kevin Andre Allen, a BOI (Born on the Island) during his primary years then a move to Hitchcock for his High School years, was born August 16, 1981 to loving parents, Kennedy Wayne Allen, Sr and Beverly Ann Ruben-Allen.

After completing High School, Kevin moved to Denver, Colorado where he met the love of his life, Kecia Marie Williams. The two were married in a grand New Year’s Union on January 1, 2009.  From this union were born five beautiful children; Kalis, Kevin, Jr (KJ), Kaleah, Keyona and baby Kareem.  Kevin was a family man first!!! He loved his children and devoted his life to being a great father. He was known to the family as a gentle giant. Whenever you were around him you knew you were safe. Kevin was a quiet man, he enjoyed the simple things but he was a deep thinker. Kevin had a passion for sports and was successful in sports at a young age. Kevin united his love for his family with his passion for sports and became the greatest family man you could ask for. He helped mold his wife into a mother. He sculpted his children into winners with love. Kevin motivated anyone who knew him to do what’s right.   He was God sent as his wife Kecia would always say. Kevin would get off work after working all night from the United States Postal Service where he worked diligently and efficiently for 2 years, then take Kalis to school.  After returning home he would help Kecia with the other little ones before settling down to rest. You would also fine he and Kecia at a game for Kalis or KJ or any other event of the children.

Kevin worked at All My Sons Moving Company in Denver, Colorado for 10+ years. After moving back to Texas, He and his family settled in Houston. Since being here, he has worked for UPS for 2 years and currently was working for the United States Postal Service.