add a candle »
Oct 17, 2021 My dude Kenny! We met in flight school and started ATX Heli Tours together. I only had 7 years with ya but your laughter will stay with me forever bro! I\'ll see you on the other side. You fly with me on every flight now. Love ya man. R.I.P. Glen Crawley
Oct 15, 2021 It was a privilege to know Kenny. He is a close friend of our son, Elias. Kenny has always been part of our family in thought and for a time in presence. He has gone on to a better place with our Lord and Savior, Jesus Christ. I remember consoling Kenny when Elias went off to Iraq. He didn’t understand why he went but he listened to me. Kenny was always concerned for others. He always brought joy to my family because he always had something to say and especially to my wife, “miss Linda”. He dealt more with my wife, Linda and always brought her joy and laughter. One incident that we always remember is when Elias and the rest of their group came to the house and my wife was chasing a pot belly pig with a fish net. Kenny broke out with “miss Linda” and could not stop laughing. God bless the Garth family in their time of grief. “Cast all your cares on Jesus because He cares for us” 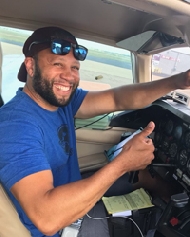 Kenneth William Garth Jr. was born in Houston, TX on January 24, 1980. He passed away Friday, October 1, 2021 at the age of 41 years in Austin, TX. Ken became interested in BMX in 8th grade and raced at numerous tracks throughout Texas. At age 16 he came in 3rd place in the “Race of Champions”. After competing for 3 days, he won 4th place out of the country in the “Grand Nationals” in Tulsa OK. After graduating from Brazoswood High School he moved to San Antonio, TX. Ken designed and built memorable BMX trails known throughout the world. He worked at various jobs and attended Hallmark University. He graduated with an AAS in Airframe & Powerplant from the College of Aeronautics. Ken resided in Austin, TX where he built his future. Shortly thereafter he was employed by Berry Aviation as an Aviation Technician. When an opportunity arose to travel, he accepted a job as a contractor working in Afghanistan. He attended Veracity Aviation Flight School in 2016. Ken decided to start his own helicopter business in November of 2017 called “ATX HELI TOURS” which he partnered with his classmate, Glen Crawley. Kenneth was blessed to travel to various cities in Europe, Asia, South America, and had planned to visit Australia in the Spring.

Ken loved flying, snowboarding, skiing, snorkeling, skateboarding and of course riding his bike. He had a Godgiven natural ability for Art and won awards in Indianapolis and Texas. He also enjoyed sketching pictures of people and places wherever he went. When he was not drawing, Ken used photography to capture time and places. After 9 years and 10 months as a contractor, Ken started another business called “True Grit Garage” rebuilding vintage trucks. He also purchased and started upgrading a four passenger Mooney airplane. Everything Ken touched grew into success, he was such an incredible, passionate and impactful young man that touched each and every one of our hearts.