add a candle »
Aug 21, 2015 Words cannot express how deeply saddened I was to hear about Kenny's passing. He was a wonderful man and he will always be in my heart. My sincere condolences to everyone. He will be greatly missed. Ellen Baker
Aug 20, 2015 MY DEEPEST CONDOLENCES FOR YOUR LOSS MY PRAYERS ARE WITH YOU AND ALL THE FAMILY.GOD BLESS YOU JANIE ZAMORA
add a note » 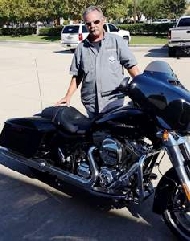 Alvin, Texas – Kenneth Richard Baker, 59, originally from Sunnyland, Illinois passed away Wednesday, Aug. 12, 2015. He was born October 18, 1955, in Galesburg, IL, to Richard A. Baker and Judith M. Stahl (Johnson). Ken is survived by his son, Chris Baker; his fiancé, Connie J. Elies and their grandson Jaxon; his step-mother Sam Baker of Hannah City; his sisters Donna Baker and Theresa Miller both of Creve Coeur, Il., Sami Nelson  of Hannah City ;  his brother Rodney Baker of Chillicothe, Il.; as well as many nieces and nephews.  He was preceded in death by his father and mother; his paternal and maternal grandparents; and a niece.

Following in his father’s footsteps, Kenny spent over 25 years as truck driver; most recently driving for Jacobson Transportation of Pasadena, Texas.  He loved driving a “big rig” and teaching others to do the same as a Certified Driver Trainer.  He was also extremely proud to have served his country in the United States Marine Corp.  Kenny was attached to the 2nd FSG (Force Support Group) and served from 1975 – 1979.

Kenny’s “Hero” in life was his grandfather and he loved talking about the countless summers they spent together and the things granddad taught him..fishing, trapping and how to get along in life.  Kenny’s passions in life were bass fishing, Harley Davidson motorcycles and his grandson, Jaxon and like his grandfather before him, Kenny poured his passions into his grandson as well.

In lieu of flowers, the family requests memorial contributions be made to the Wounded Warriors Project.