add a candle »
Nov 23, 2021 I am so sorry for your loss. It\'s been a really long time since I last saw her. I remember enjoying the time with her when we went to visit. Linda Saunders Johnson
Nov 22, 2021 I’m so sorry to hear of your mother’s passing. Our mothers were blessed in their friendship with each other. I’m so thankful for the times that she kept me as a child when I was too sick to go to school. May God comfort you in your sorrow❤️ Brenda Saunders McDonald
add a note » 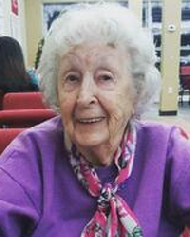 Josephine was known for her warm hospitality, a welcoming smile for everyone she met and love of her family.

Josephine was happy to work at Curtis-Wright Airplane Factory in Ohio during WWII with her cousins Norma and Alice Catherine, building the most advanced Navy aircraft in the world, the Douglas TBD Devastator torpedo bombers for the U.S. Navy to support her family in West Virginia. Josephine and her cousins later worked at Industrial Rayon Plant in Covington, VA. She and her husband Noah Lee Norman owned Norman’s trucking company in Fayetteville, WV before moving to Texas City, Texas in 1953. While raising a large family of six children, Josephine drove her children to their schools, and attended their graduations and baseball, softball and volleyball games while her husband worked as a Galveston County Deputy Sheriff, Texas City Police Officer and Chief of Police in Kemah, Texas. After they divorced, Josephine raised her three youngest children by working in League City, TX as a Clear Creek High School cafeteria cook and server. She also managed a family-owned laundromat in League City for 12 years.

Josephine was a member of the Daughters of the American Revolution, George Washington Chapter in Galveston, Texas (Patriot 2nd Lt John Campbell, PA) and the Red Hat Society in Fayette County, WV. She will be greatly missed by her friends and family.

Josephine was preceded in death by her parents Willie B and Lena Campbell Kesler of Clifty, WV and her brothers and sister Willie B Kesler “Jiggs” Kesler of Ansted, WV, Pastor George Carl Kesler of McMinnville, TN and Edith Carte of Clifty, WV. Josephine is survived by her six children Robert Norman of Ragland, AL, Nancy Hopkins of Melissa, TX, James Norman, Mary Kelley and William Norman of League City, Tx and Janet Norman of Warren, TX.

She also leaves an everlasting legacy of 11 grandchildren, 19 great-grandchildren and 5 great-great grandchildren in Texas, California, New York and Alabama that called her Murr.

Graveside services at Kesler Memorial Presbyterian in Clifty, WV (Hico) before being buried next to her parents and 5 generations of Kesler grandparents.

In lieu of flowers, please consider a donation to the Kesler Church Cemetery Fund at PO BOX 92, Hico, WV