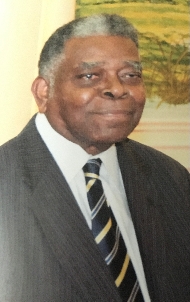 Joe Willie Briscoe, Sr, entered into eternal rest on November 18, 2021, surrounded by his loving family. Despite his health challenges, he stayed courageous and strong until the end.

He was born on March 21, 1933, in Washington County, Texas to the late Bennie and Ruby Ellis Briscoe. Joe was educated in the Washington County School System. At an early age, he accepted Christ as his Lord and Savior and united with Porter Chapel A.M.E.

While in Washington County, he met Millie Marie Cooper in their teenage years. They later married in 1954 and relocated to Dickinson, Texas. To this union eight children were born.

Joe worked as a laborer for Union Carbide, Monsanto and retired from STP Nuclear. He was a member of Four Square Masonic Lodge #35 and acted as secretary. Joe was also self-employed as a carpenter. He was often referred to by his customers as the “cabinet man.”

Joe loved the Lord. He was one of the founding members of Christian Fellowship MBC in 1970. In 1985, Joe united with New Light Missionary Baptist Church where he selflessly used his God-given talent to build the church with the help of Bro. Willie Coffey, his late son, John, and other members. Joe served in many capacities at New Light. He was a generous man with a strong conviction and faith in God. A faithful and devoted man of God are just a few of the many endearing words to describe him.