add a candle »
Feb 15, 2016 A man of great vision, passion and energy that built Galveston County one life he touched at a time Bix Rathburn
Feb 13, 2016 Jimmy was remarkable for his gifted leadership, commitment to educational opportunity for youth, and his love for Galveston County and his family. I will never forget the friendship and support he offered when I served as interim President at College of the Mainland. J. Larry Durrence
add a note » 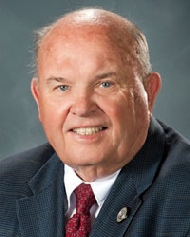 Jimmy is preceded in death by his beloved parents and Father and Mother-in-law, Malcolm and Therese Deats.  He is survived by his wife of 54 years, Jane Deats      Hayley, his two sons Jerry and wife Cindy Hayley and Jason and wife Connie Hayley, and seven grandchildren, Amanda, Abby, Allyson, Zack and Jacob Hayley and Bryanna and Nate Branch.

Jimmy was a 1955 graduate of La Marque High School and went on to earn a Bachelors of Business Administration degree from Sam Houston State University in 1959.

In 1961 he began his 25-year career with Guaranty Federal Savings & Loan, first as a branch manager and Vice President before being promoted to the Galveston Office as Senior Vice President and Director of Marketing and Public Relations, with responsibility for state-wide branching operations.

In recognition of his work on behalf of the communities and the Chamber, the Texas City-La Marque Chamber of Commerce Board of Directors renamed the Chamber office The James A. “Jimmy” Hayley Building.

Jimmy always had a love of education and followed in the footsteps of his father when he was elected to the La Marque Independent School District Board of Trustees.  He was re-elected seven times, serving 24 years on the school board and was school board president for three years.

Jimmy was also Chairman of the Board of the non-profit Energy for Schools at the time of his death.

Jimmy was active in various community non-profit organizations.  He was a  life membership of the La Marque Kiwanis Club, a member of St. John’s United Methodist Church, Texas City Rotary Club, Gulf Coast Chamber Executives, Texas Chamber of Commerce Executives, and United Way Galveston County Mainland.  He also served on the Houston Livestock Show and Rodeo Committee and on the Galveston County Fair Board for a number of years, heading the Auction Committee.

In addition to his professional life, Jimmy had a special place in his heart for family and friends.  He loved life and all aspects associated with the Texas City-La Marque community.  He also loved sports of all kinds and was a life-long Houston Oilers/Texans season ticket holder, and never missed a Sunday of Texans football. If the Texans had an away game and the local church minister’s sermon got a little long, he began checking his watch, hoping to make the kick-off.  Jimmy was an athlete himself, having played high school baseball and later managing and playing men’s fast-pitch softball. He was bestowed the nickname of “Squat-Low Hayley” from his many years of playing catcher.

As much as he loved following the local high school athletic scene, he had a special interest in following his grandchildren’s sporting events including Amanda’s and Abby’s gymnastics, Alyson’s and Abby’s tennis, Zack’s and Jacob’s baseball, Bryanna’s soccer, and Jacob’s football.  He was known as Zack’s caddy and number one fan at all his golf tournaments.

Jimmy was himself an award-winning golfer and a collector of classic golf clubs and sports memorabilia.  Nothing was better on a sunny spring afternoon than to spend time with his long-time golfing buddies.

A visitation will be held on Friday, February 12th from 4:00 p.m. until 8:00 p.m. at First United Methodist Church in Dickinson, with a Celebration of Life Service to be held on Saturday, February 13th at 1:00 p.m. at the Charles T. Doyle Convention Center.  Burial to follow at Galveston Memorial Park in Hitchcock.