add a candle »
May 6, 2014 Prayers and heartfelt love to the family....God Loves you!!! CASSANDRA LITTLETON
May 4, 2014 May God lighten your heavy hearts and give you peace and comfort as you rest his little soul. My prayers and thoughts are with you and your family... Marina Galindo
add a note » 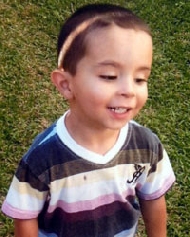 Jesse Joseph Galicia III passed away on April 24th, 2014 in Galveston, Texas.  Jesse was born on February 15th, 2011 to Alaniz Hill-Loree and Jesse Galicia Jesse Jr.  Our Lord called our sweet Jesse home to reunite with him and serve with his Angels.

Jesse is survived by his brothers, Jaden and Julian;  as well as, his sister, Jeszlyn Galicia.

Jesse loved all things Superman and playing at the park, especially with Mom and Dad.      Jesse’s absolute favorite movie of all time was Nemo.  He loved it so much he wore out three Nemo DVDS.  He adored that little Orange Fish and would giggle and emulate that little fish every time he watched it.  Jesse loved playing outdoors with his brothers on the trampoline and riding their power wheel. Jesse had a joyful spirit and could not resist dancing to any and all music. Jesse was a very giving little boy and would always share his snacks with his little sister.

Jesse deeply touched our lives in his short time with us and will always be in our hearts.

Services are in the care of Carnes Funeral Home in Texas City.  A visitation will be held on Saturday, May 3rd at the First Baptist Church in Galveston, Texas.  The visitation will be held from 9 to 11am, followed by a funeral service at 11am.  Pastor Ray Meador will be officiating services.  The church is located at 822 23rd Street in Galveston. Leave a tribute or light a candle for Jesse at  https://www.carnesfuneralhome.com/carnes-obituaries.