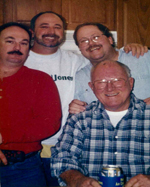 Affectionately known by many as “Pop”, Jim Jones was born on July 2, 1933, in Sulphur, Louisiana, to the parents of Mitchell and Rosalee Jones. He passed away from this life, at the age of 85, in his home in Galveston, Texas, on January 10, 2019.

Jim served in the United States Navy for 30 years which included one tour in Korea and two tours in Vietnam.  After retiring from the military, he began his second 30 year career in the Maintenance Department at Galveston College.

Per his request, there will be a celebration of life with a crawfish boil – Louisiana style - in the spring.

Jim was preceded in death by his parents and his youngest son, Duane Mitchell Jones. He is survived by his sons:  Dale Franklin Jones (Linda) of Alvin, and Jimmy Richard Jones (Margaret) of Friendswood; his daughter-in-law, Bonnie of Seabrook; his grandchildren: Melissa Decuir (Clint), Travis Bailey (Ashley), Sarah Jones, Lauren Hightower (Ken), Elizabeth Jones and 4 great-grandchildren with one great grandchild on the way.

The family wants to give a special thank you to Susan Hinds for being such a caring and capable care taker for Pop. His wishes to remain at home were fulfilled because of you.