add a candle »
Nov 21, 2017 The Bible helps us to know that you can see your dead loved one again at Acts 24:15 \"And I have hope toward God which hope these men also look forward to that there is going to be a resurrection of both the righteous and the unrighteous\" I hope you find comfort in this message Kaiylah S
Sep 19, 2017 On behalf of the members of the Long Beach Alumnae Chapter of Delta Sigma Theta Sorority, Inc. We extend our deepest condolences to you and your family. We want you to know that you are loved and supported. Brother James is in the arms of the angels. We love you Soror Shaw and are here for you. Dominique Bell, President of Long Beach Alumnae
add a note » 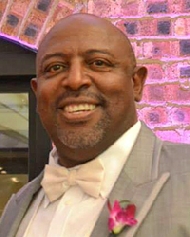 James Edward Shaw was born November 6, 1961 to Andrew and Hester Shaw in Los Angeles, California. He was the fourth born of six children.

James graduated from Gardena High School where he was a multi-sport athlete. He continued his education and basketball at California State University-Dominguez Hills, where he was a stand-out, receiving All-American recognition.

He spent much of his career working for Federal Express. James was an avid sports fan and could often be found rooting for the Lakers or watching his daughters compete. He accepted Christ at a young age and was passionate about mentoring, giving to others and teaching from his experiences. He was a kind and gentle man.

In 1986, he married his college sweetheart and wife of 31 years, Donna Elaine Morris. They spent many years together in Virginia before moving to Texas, where he passed.

He is the beloved father of two daughters, Rachel Pierre (Jeremy) and Dorian Shaw. He was the devoted grandfather to Josiah Pierre.

Additionally, James is survived by a host of nieces, nephews, cousins, other family and friends who loved him dearly.

A visitation will take place on Friday, September 15, 2017 at 2pm followed by a Celebration of Life Service at 3pm in the chapel of Carnes Funeral Home, Texas City.