add a candle »
Mar 12, 2019 Just as Gael, you were also one of the most important people in my life. A wise and gentle spirit, who loved really big! I\'ll never forget getting off the plane when Cathie & I returned from Europe in high school and you were all teary-eyed (maybe leaving too?!) - you were sensitive, yet strong Sonia Borde
add a note » 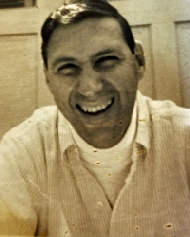 Jack James Carrel, Senior passed away on the morning of February 8, 2016 at his daughter Cathie’s home in Humble, Texas surrounded by his family.  He was 87 years old.

He was born in McKeesport, PA on December 22, 1928 to Hilda Manning Carrel and Harvey James.  He was an only child and from a young age was raised by his mother and her second husband, Frank LeRoy Carrel.

He graduated from Avon Lake High School.  After high school, he served in the National Guard during the Korean War as a Sergeant in the 145th infantry, Headquarter Co. at Fort Polk, La.  He received his Bachelors in Marketing from Fenn College in Cleveland, Ohio and graduate studies in Industrial Relations at Fenn and Baldwin Wallace College.

Jack began his career in the aerospace industry in 1954 as Employment Manager at Lear-Romec in Elyria Ohio and rose to Personnel Manager at Lear-Siegler.  He was an active member of Christ Evangelical Lutheran Church in Avon Lake, Ohio serving as president of the Church Council, Sunday school teacher and advisory to the youth group.  He met his wife, Gael, through his church activities and they were married on April 11, 1959.  In 1970, he and his family moved to Bogalusa and he began work at Crown Zellerbach until his retirement as Personnel Manager in 1992.

He served on the board of the Bogalusa Community Medical Center and the Civil Service Board of Bogalusa.  He served as the advisor to the Walther League at Zion Lutheran Church, was active with Christmas in the Park, a partner with his son at the Werth-A-Stop Auction, an HIV educator with the American Red Cross, and with his wife, established the first HIV support group in Bogalusa, Facing the AIDS Crisis Effectively (FACE).  He and Gael were avid antique collectors and had booths at antique malls in Pass Christian and Bay St. Louis with their business Dust & Rust.

He is preceded in death by his mother, Hilda Manning Carrel; his stepfather, Frank LeRoy Carrel; and his father, Harvey James.

He is survived by his wife of 56 years, Gael; his son Jack James Carrel, Jr.; his daughter, Catherine Carrel-Montano and her spouse, Larry; his son, Sean Andre Carrel and spouse, Rob; his grandson, Leo Wesley Carrel Montano; and his cousins, Donald and Julia Keim; Dean and Terry Sladek; and Donna Cavender.

Jack’s body was donated to the University of Texas Health Willed Body Program for research at the UT Medical School.  Eventually his cremated remains will be buried in the family plot in Ohio.  Because of his love of animals and his pride in his important work in HIV in Bogalusa, memorial donations can be made to the Houston ASPCA at http://www.houstonspca.org/ or the Louisiana AIDS Advocacy Network, c/o The Philadelphia Center, 2020 Centenary Blvd, Shreveport, LA 71104.