add a candle »
Nov 6, 2020 I will never forgey you bud. Allll those years of playing ball together. All the fun we had on those teams. I will never forget coming down to see y\'all and you taking me out to fish dollar point. We didnt catch nothing that day, but man was it fun. I love you brother! You will be missed! Ronald Swan
add a note » 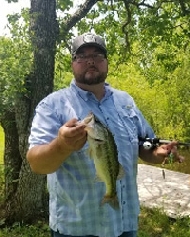 Ian Ralston Mackenzie, age 36, passed away November 1, 2020 in Hitchcock, Texas. He was the husband of Kimberley Dawn Mackenzie . They shared 12 years together and had 3 amazing children.

Born in Dallas, Texas, he was the son John Stuart Mackenzie and Grace Elaine Jenkins. His childhood was spent in Dallas/ Fort Worth and moved to Santa Fe after meeting his wife, Kimberley.

He was a member of First Baptist Church of Alta Loma in Santa Fe, Texas.  He spent most of his free time enjoying the outdoors while hunting or fishing. He will always be remembered for being an amazing father to his three beautiful kids. They were his whole world.