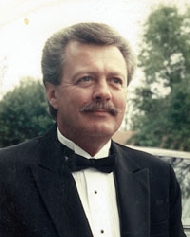 A fifth generation BOI, he was born on February 18, 1947, at St. Mary’s Hospital in Galveston, Texas to Jannette and Hubert Smith, Sr.  He was a graduate of Ball High School and attended Durham College in Pasadena, Texas, prior to serving in the US Navy. Before he retired, he worked many years in numerous hospitals as the Director of Environmental Services.

On February 17, 1978, he married the love of his life, Charleen Heffernan Smith.

He enjoyed surfing and being a lifeguard during his teen years on the Galveston beaches he loved so much.  He loved playing baseball as a young man and played for the Schwartz’s Senators. The team went on to win the state championship.  He loved traveling and had a goal of visiting all 50 states with his wife.  They visited 47 states together before his passing.  He enjoyed fishing, bringing his Corvette to car shows, but most of all, he treasured playing Xbox games with his grandsons, watching reruns of Gunsmoke on TV and spending time with his grandchildren and great-grandson.

Butch was preceded in death by his parents and his daughter Renee Mathis.

Visitation will be on February 2, 2019 at 2pm with a Memorial Service at 3pm.