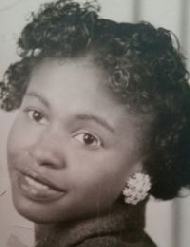 Hortense Elece Whiting departed peacefully on August 07, 2015, aged 83, at home surrounded by her loved ones. Hortense was born in Houston Texas on May 11, 1932 to parents Almeta and Charles Sheffield. She was the second of four children. She was united in marriage to Godfrey Whiting on October 2, 1952.

Hortense was a well-educated scholar. She graduated from Texas Southern University in 1972 and was a dedicated teacher of the Houston Independent School District from which she retired after many years in service. She was a force to be reckoned with and she had a personality that was larger than life.

Hortense was preceded in death by her husband, Godfrey R Whiting. She is survived by her daughters, Blynthia, Wanda Carol, Rhonda, Toni, Dawn, and Sheryl. She left behind her sister, Ester Jean Ballard and brother Robert L Sheffield, 17 grandchildren and 27 great grandchildren.