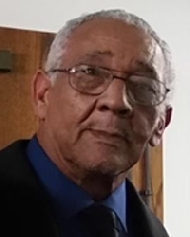 On November 8, 1942, in Galveston, TX, a handsome baby boy with an infectious smile, and an all-around people’s person personality was born to Haywood and Emma (Derouen) Mason. Haywood Mason III, who was affectionately known as Su Su, would light up many lives and touch many hearts. His jokes kept everyone laughing, his generosity knew no bounds, and his love was unconditional to all.

Haywood confessed his life to Christ at a young age and was baptized at Holy Rosary Catholic Church in Galveston, Tx. He retired after many years as a dedicated hardworking construction worker and operator. In his spare time, he enjoyed fishing, playing dominoes and spending time with his family and friends. The biggest joy of Haywood’s life and the roles he was most proud of was being a father, grandfather, great-grandfather, big brother, uncle, and friend.

Haywood was educated in Dickinson schools and was a 1960 graduate of Dunbar High School. He was a proud veteran having served his country in the United States Army. He was an official member of The American Legion.