add a candle »
Dec 10, 2019 You\'re always in our hearts. God bless you and your beautiful family. Jackie Brending-Lerbs
Nov 28, 2019 RIP Russ - and prayers and love to the family. Russ and I were friends from Middle School and High School. He was a very sweet and kind person. Peggy Billingsley
add a note » 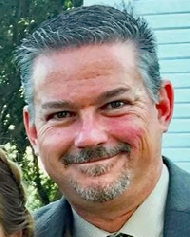 George Russell "Russ" Cooper passed away Monday, November 18, 2019 in Webster, Texas.  He was born in Pensacola, Florida in July 1969.  He lived in Pensacola and Panama City, Florida until his family moved to Houston, Texas. in 1975.  He graduated from Westbury High School and University of Houston.  He loved bicycles and his family purchased Webster Bicycle in 1992 and then retired and he took over and was the owner until he passed. He met the love of his life, Anastacia Regina Sagan, in Austin, Texas and they were married in September 1996.  They had a daughter, Anabella Madeline Cooper.

Russ loved playing soccer while in middle and high school. He also started Bicycle Motorcross Racing (BMX) at a young age and has hundreds of trophies and plaques for all of his wins all over America.  He also led the Webster Bicycle MS 150 ride from Houston to Austin for many years and really enjoyed those times as well.  His family was everything to him.  He loved to take them boating and traveling in their RV trailer.  Lots of good time were had by all.

He is preceded in death by his Grandparents, George B. (Ethel K.) Cooper and Harold E. (Lynell D.) Rearick and his Aunt and Uncle, Madeline Josephine (Don) Brown and cousin David Bowen.

Services will be held at Carnes Funeral Home, 3100 Gulf Freeway, Texas City, TX with visitation from 9:00-10:00 and the Celebration of Life from10:00-11:00 AM on Saturday, November 23, 2019.  In lieu of flowers the family is asking that donations be made to Russ's Go Fund Me account that is set up at: https://www.gofundme.com/f/rallying-for-russ